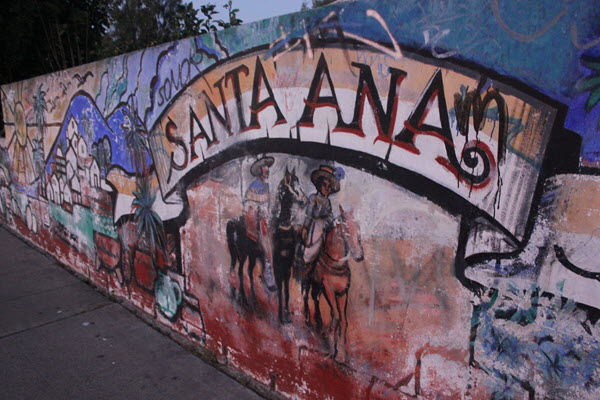 By Sabrina Imbler – AtlasObscura.com – Photo: Courtesy of the O’Cadiz Family.

Photo: The Raitt Street mural around four years ago, before the whitewashing.

Maria del Pilar O’Cadiz learned that someone painted over one of her father’s murals. The news came in a text from her sister, who was driving home from work at an elementary school in Santa Ana, California. She had just passed the wall, on Raitt Street, to see it was a shocking white. Before it was whitewashed, the Raitt Street wall held a mural by artist Sergio O’Cadiz, who passed away in 2002. The mural, which was painted in 1994 by both the artist and local children, with the permission of the owners of the land the wall abutted, contained scenes of the old Santa Ana cityscape, with caballeros on horseback and children carrying banners that read “Love,” “Tolerance,” and “Peace,” among other messages. A painted scroll noted, in English and Spanish, that the mural was dedicated to “the children of Santa Ana and the people who work for their future.”